THE PERFECT WATER
Drinking water on a daily basis is essential for the proper functioning of the body, but the benefits are enhanced if the liquid has the adequate doses of oxygenation, minerals and ions. ​What some call drinking "THE PERFECT WATER".

​We know that it is necessary to drink water to achieve hydration that allows the proper functioning of our body, renewal of skin cells, as well as taking care of each organ we have, but optimizing this intake is much more valuable due to the benefits that we will obtain.
With the new discoveries it has been shown that consuming optimized water containing magnetic and kinetic energy management, as well as alkaline and ions offers greater health benefits. To do this, several water purification firms have developed electronic devices that you can have at home to treat the water you consume.
The result of these processes of oxygenation, mineralization and movement of the water is to create alkaline water with an organized molecular structure that helps a better cellular assimilation.
This type of water is oxygenated, generates an antioxidant factor that slows or reduces the oxidation of cells, and also provides natural calcium, ionizing the water improves its absorption at the cellular level and makes it alkaline, improving the body's PH levels.
It also generates small clusters with a molecular structure that facilitates absorption at the cellular level, removes waste quickly and keeps the cells of our body fresh and clean.
So, look for options that allow you to improve the water you consume so that you receive more benefits.

BENEFICTS OF DRINKING PERFECT WATER AND THE IMPORTANCE OF HYDRATING IT 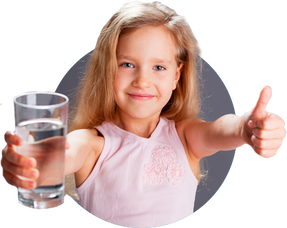 There is a lot of confusion in the market about water ionizers. The internet, for example, is full of information, misinformation, misinformation, and general confusion about what water ionizers do and don't do.
WHAT IS IONIZED WATER?
To put it simply, alkaline water is water that has a higher potential hydrogen than regular drinking water. The pH level is measured by the amount of hydrogen ions that exists in a given solution. High concentrations of hydrogen ions yield a low pH (acidic substances), whereas low levels of hydrogen ions result in a high pH (basic substances).1
The pH scale ranges from 0 to 14. Anything below 7 (ranging from 0 to 6.9) is acidic, and anything above 7 (ranging from 7.1 to 14) is basic. The blood in your veins is slightly basic (pH = 7.4), whereas soap (pH = 12) and bleach (pH = 13) are highly basic. On the other hand, coffee is slightly acidic (pH = 5) and tomato juice (pH = 4) and lemon juice (pH = 2) are highly acidic.2
​The term alkaline gets used interchangeably with basic but they’re not exactly the same.3 Alkaline compounds (alkali) are substances, like salts, metals, and minerals, that, when added to water, make it more basic.4 Water always contains some amount of dissolved solids including minerals like calcium, magnesium, potassium, and sodium, but alkaline water tends to have a higher amount of total dissolved solids, which increases its pH level. Regular drinking water is typically neutral with a pH level of 7 and alkaline water is slightly basic with a pH level of about 8 or 9.
What Are the Benefits of Alkaline Water?
​The idea that alkaline water is medicinal, curative, and able to bring about optimal health seems to be based on the belief that acidic properties in the body and blood are the cause of ill health and disease and need to be neutralized. Therefore, a more alkaline body will lead to better health.Alkaline water contains four major minerals that contribute to its remarkable health benefits:
There are many claims when it comes to the benefits of drinking alkaline water, including immune system support, weight loss, and cancer resistance. Although these claims are notable, they lack proven scientific research. However, there are several incredible health benefits to drinking alkaline water that have been scientifically proven and we are here to share them with you.
Improve Bone Health
​Some research has been done on the effects of alkaline intake on bones. A study published in the scientific journal Bone found a positive effect on bone resorption with people who consumed alkaline water rich in bicarbonate.9 Bone resorption is the process where old bone cells are broken down and replaced by new ones.10 Less bone resorption and more mineral density result in better bone strength. The authors of the study concluded that “a bicarbonate- and calcium-rich alkali mineral water decreased bone resorption more than a calcium-rich acidic mineral water.”
Soothe Acid Reflux
A study published in Annals of Otology, Rhinology & Laryngology found that drinking alkaline water at pH 8.8 can help soothe acid reflux because the higher pH level kills pepsin, an enzyme involved in breaking down food proteins and a main cause for acid reflux.11 Acid reflux is when the contents of the stomach, which are acidic, splash back up the food pipe.12 Acid reflux that keeps happening for a long time can cause damage and a disease known as gastroesophageal reflux disease, or GERD.13
Reduce High Blood Pressure, Blood Sugar, and Cholesterol
​In 2016, scientists in Shanghai found that three to six months after drinking alkaline water, people with high blood pressure (hypertension), high blood sugar (diabetes), and high blood lipids (cholesterol) had lower measures in each of these factors.14 Researchers found that a high-pH electrolyte water reduced blood viscosity, the thickness and stickiness of your blood, in 100 adults after exercising. This may help reduce cardiovascular strain due to dehydration.15
Enhance Hydration
​A 2017 study published in Biology of Sport found that drinking alkaline water shows a positive effect on hydration status after anaerobic exercise with a significant decrease of specific urine gravity.16 Intake of alkaline water also shows a positive effect on urine pH during the anaerobic test protocol, and much more efficient lactate utilization after the high-intensity interval exercise.17 In addition to enhanced hydration, efficient lactate utilization results in increased energy, as lactate serves as an energy source in skeletal muscles.18
In contrast, subjects who consumed regular drinking water showed no changes over the same period of time. These results indicate that the habitual consumption of alkaline water may be a valuable nutritional vector influencing both acid-base balance and hydration status, as well as energy levels in active healthy adults.19
Increase Longevity
A study published in 2016 looked at the effect of consuming alkaline water on 150 mice over a period of three years. Results suggested that those who drank alkaline water had signs of greater longevity, in other words, they aged less and were more likely to live longer. Histological examination of mice kidneys, intestines, hearts, livers, and brains was performed in order to verify the risk of diseases correlated to drinking alkaline water. No significant damage, but aging changes, emerged; organs of alkaline watered animals resulted to be relatively superimposable to controls, shedding a further light on the benefits of alkaline water consumption in humans.20
Get Alkaline Water with AQUA GOLDEN
​
​1 https://www.usgs.gov/special-topic/water-science-school/science/ph-and-water?qt-science_center_objects=0#qt-science_center_objects
2 https://www.sciencebuddies.org/science-fair-projects/references/acids-bases-the-ph-scale
3 https://sciencing.com/alkaline-vs-basic-6132782.html
4 https://www.merriam-webster.com/dictionary/alkali
5 https://www.nof.org/patients/treatment/calciumvitamin-d/
6 https://ods.od.nih.gov/factsheets/Magnesium-HealthProfessional/
7 https://medlineplus.gov/ency/article/002415.htm
8 https://medlineplus.gov/potassium.html
9 https://www.sciencedirect.com/science/article/abs/pii/S8756328208007813
10 https://www.mybiosource.com/learn/conditions/bone-resorption/
11 https://www.medicalnewstoday.com/articles/313681
12 https://gi.org/topics/acid-reflux/
13https://www.mayoclinic.org/diseases-conditions/gerd/symptoms-causes/syc-20361940 h
14 https://jissn.biomedcentral.com/articles/10.1186/s12970-016-0153-8
15 https://www.cvphysiology.com/Hemodynamics/H011
16 https://www.ncbi.nlm.nih.gov/pmc/articles/PMC5676322/
17 https://medlineplus.gov/ency/article/003587.htm
18 https://www.ncbi.nlm.nih.gov/pubmed/24950803
19https://www.nal.usda.gov/sites/default/files/fnic_uploads/energy_full_report.pdf
20 https://www.ncbi.nlm.nih.gov/pmc/articles/PMC5676322/